These resources are designed to be used in one session with year 6 (10/ 11 year old) students. Although they will support numeracy, literacy and various other aspects of the curriculum, they are designed to prepare students for secondary school rather than support the year 6 curriculum.

There are 6 suggested activities. Although they are designed to be run sequentially, you may choose to use only some of the activities, or to supplement them with your own ideas.
It should be possible to use these activities with any class size.

Many people, including Ellie Highwood, Cristina Charlton-Perez, Helen Johnson and Laila Gohar, have contributed to these resources.

Activity 1 – the Difference between Weather and Climate 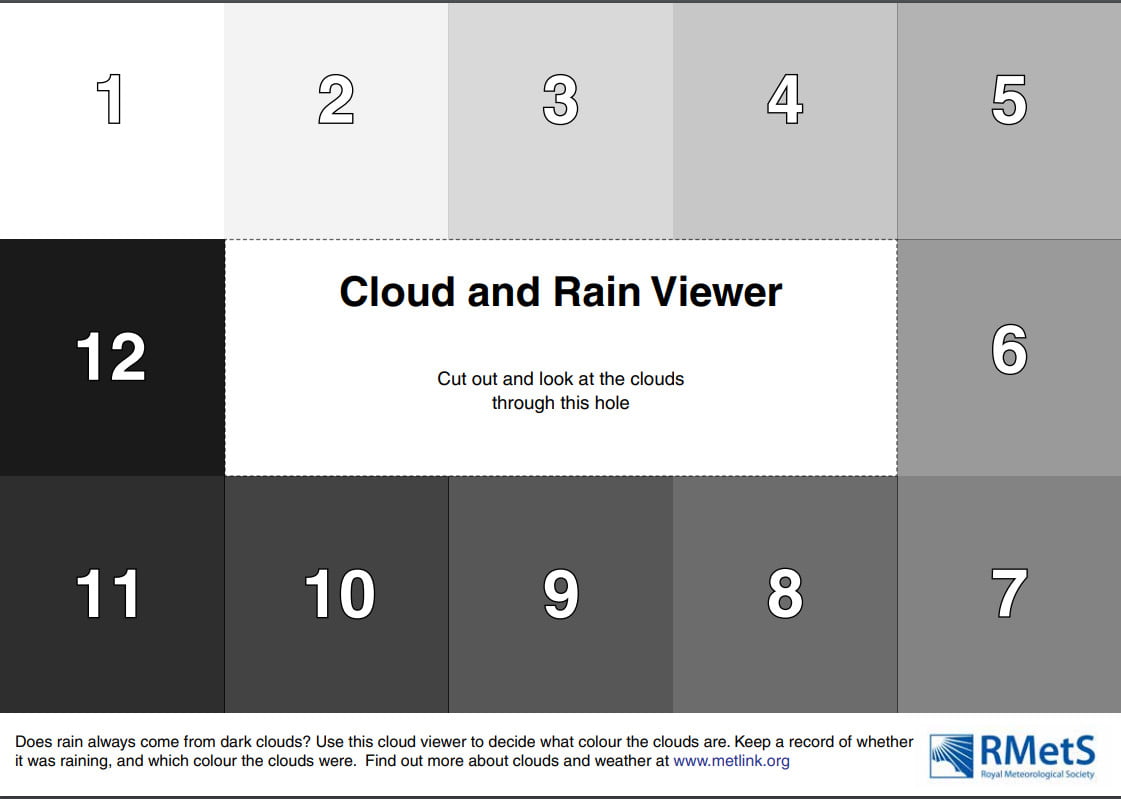 Experiments and Demonstrations for Clouds and the Water Cycle

Including hail, downdraughts and cloudbursts

It was reported in The Times newspaper on 15 April 1986 that a hailstorm lashing Dhaka, the capital of Bangladesh, had killed nearly 50 people and injured more than 400. The storm had brought winds of about 60 mph and hailstones weighing up to 2 lb (nearly 1 kg). Houses had been flattened, communications disrupted and the windscreens of more than 700 cars shattered. In such conditions, an umbrella was no use whatsoever; even a riot shield may not have provided adequate protection! According to Dick File, in Weather Facts (Oxford University Press, 1991), this storm (which struck on 14 April 1986) killed 92 people and produced hailstones that weighed 1.02 kg.

The heaviest hailstones to fall on the United Kingdom did so at Horsham, West Sussex, on 5 September 1958 and weighed 140 g. They were almost the size of a tennis ball. When they hit the ground, they were travelling at speeds in excess of 100 mph (50 m/s). If you find this surprising, do a little calculation, using the formula:
V2 = u2 + 2as where u is the initial speed, v the terminal speed, a the acceleration (in this case, due to gravity) and s the distance travelled. For a hailstone falling from a height of 500 m through still air, v = 100 m/s! The impact of a missile the size of a tennis ball travelling this fast is much more serious than that of a cricket ball hit for six.

Should you ever get the chance, collect some large hailstones and cut them in half. You may find a layered structure, with alternate layers of clear and opaque ice (as in the picture on the right, which shows a section of a hailstone viewed by transmitted light). The layers are acquired in different parts of the storm clouds. As hailstones fall, they collect tiny water droplets, which flow around them and freeze. If no air is trapped, the ice is clear.

The storm which struck the Wokingham area of Berkshire on 9 July 1959 produced hailstones more than 2.5 cm in diameter. This storm was studied in detail by Professor Frank Ludlam of Imperial College and his team of co-workers, who produced a striking three-dimensional model of the airflow with-in the storm and explained how large multi-layered hailstones may form in such weather systems.

In the diagram on the right, streamlines of air in which condensation occurred are shaded. The surface areas affected by rain and hail are shown by, respectively, grey and black shading. Heights are shown in thousands of feet. Precipitation formed in air which entered the storm near position H. As shown, the precipitation was carried across relative to the storm to around 13-15,000 feet, whereupon it fell and re-entered the strong updraught near posit-ion O. Some precipitation particles reached altitu-des of 30,000 feet or more and grew into large hail-stones before falling again, forward of the strong updraught, near position H’. The storm moved from left to right, with rain on its left flank and a squally ‘gust front’ (shown as a cold front) on its right flank. Behind the storm, chilled air reached the ground.

The diagram on the right shows a vertical section through a typical severe hailstorm (moving from right to left) and is also taken from Ludlam’s 1961 article in Weather. Compare this diagram with the three-dimensional model above

The paths of the air are drawn as if the storm was stationary. They are, therefore, relative streamlines. The dashed lines are trajectories of small hailstones. The thick full line shows the trajectory of a large hailstone.

To some extent, the features shown on this vertical section occur also in vigorous cumulo-nimbus systems which do not produce large hail. Students can look out for mamma, the udder-like cloud feature that hangs under the anvil and other parts of the cloud. How are mamma formed? Students can also observe gust fronts and measure the temperature drop that occurs when a storm passes. It is often several degrees Celsius. Perhaps, with the help of someone who has a car, they can map areas of rain and hail relative to moving storms.

In severe storms, downdraughts may be as strong as 30-40 m/s and reach the ground as ‘down-bursts’. These are dangerous, as the diagram above shows. Downbursts spread out near the ground. An aeroplane that flies into such an outflow first encounters an increasing head-wind (at 1 and 2), which adds to the speed of the speed of the air flowing over the aircraft’s wings and thus increases lift. At 3, however, the strength of the downdraught begins to reduce the altitude of the aircraft; and at 4 and 5 the aircraft experiences both a tail-wind (which reduces air speed and lift) and a downward force from the downdraught. Over the years, there have been many air disasters caused this way, especially in North America.

On 15 August 1952, the village of Lynmouth in North Devon was devastated by a torrent of water which poured off Exmoor; 34 people died. On 29 May 1920, in and around the Lincolnshire town of Louth, 22 people died when water from a storm over the Wolds caused the River Lud, normally a small stream, to rise 5 m above its normal level. In Dorset and Somerset, there have been similar occurrences; and in all cases, severe storms caused the havoc. When such storms occur in the British Isles, the wind in the upper troposphere is typically from the south-west, with the wind in the lower troposphere from a north-easterly point (and pressure low to the south and south-west). If this flow is lifted orographically, the storm may become stationary and deposit several inches of rain in a short time. Thus, it is places below slopes that face northwards or north-eastwards that are most at risk.

To frighten away the evil spirits that caused hail, primitive tribes used to shoot arrows into storm clouds; and Christians have tried to exorcise these spirits by ringing church bells (a dangerous practice because of lightning strikes on bell towers). Not only arrows, but also cannon-balls, artillery shells and rockets have been fired into storm clouds, but all to no avail. Though there is some evidence that cloud seeding may help to reduce the size of hailstones, there is nothing we can yet do to prevent the formation of severe storms.

They have subsequently been updated by the Royal Meteorological Society.

BBC What is Weather animations and lesson plans for KS2 weather.

Storm Warning resources from the Royal Society for KS2.

Weather resources from the Primary Magazine from the National Centre for Excellence in the Teaching of Mathematics. Requires free registration on the national STEM database.

A nice resource looking at an extreme weather event in the UK (the December 2011 storm) for schools with DigiMap.

Teachers.TV looks at the effects of weather on people, weather across the KS2 curriculum with more, KS1/2 Teachers in the Freezer, Weather Around the World and making houses hurricane proof.

A nice interactive resource for weather forecasting, focussed on Wales.

From the GA Investigating Climate Zones and Climate Change.

Windows to the Universe – climate.

Pupils should be taught to:
choose, use and combine any of the four number operations to solve word problems involving numbers in ‘real life’

a) use a wide range of methods, including diagrams, drawings, tables, bar charts, line graphs and ICT, to communicate data in an appropriate and systematic manner

Print off and laminate the names of enough winds. Hide them in the classroom or in the school grounds. As the students individually, in pairs or small groups to find a wind. They should then research the wind they have found, answering questions like:

– Where is the wind found? Use an atlas or Google Earth to find the place and see how the
local geography affects the wind (are there mountains nearby?)
– When does the wind occur?
– How long does it last for and how big is the area it affects?
– Do people like this wind?

Their research could be presented using PowerPoint or large sheets of sugar paper, and/ or could be used as the basis for a story or newspaper report about the wind.

In this activity, students share weather information to work out what the weather is in different places. It is suitable for upper KS1 or KS2.

It can be used with different abilities and improves listening skills, group work and to encourage every group member to participate.

Differentiation can be incorporated by giving poor readers less information (temperature cards only) or appointing a classroom assistant to read for a group of children. Alternatively, a set of easier clues can be produced and the teacher just has to note what colour of card they are printed on.