It is the concentration of greenhouse gases in the atmosphere, rather than the emissions at a particular moment in time, which determines the temperature of the Earth.

Even if emissions fall (position 3), as was the case briefly in 2020 when COVID19 related restrictions reduced global emissions, the concentration of greenhouse gases in the atmosphere continues to rise.

The relationship between emissions, concentrations, global temperature and sea level 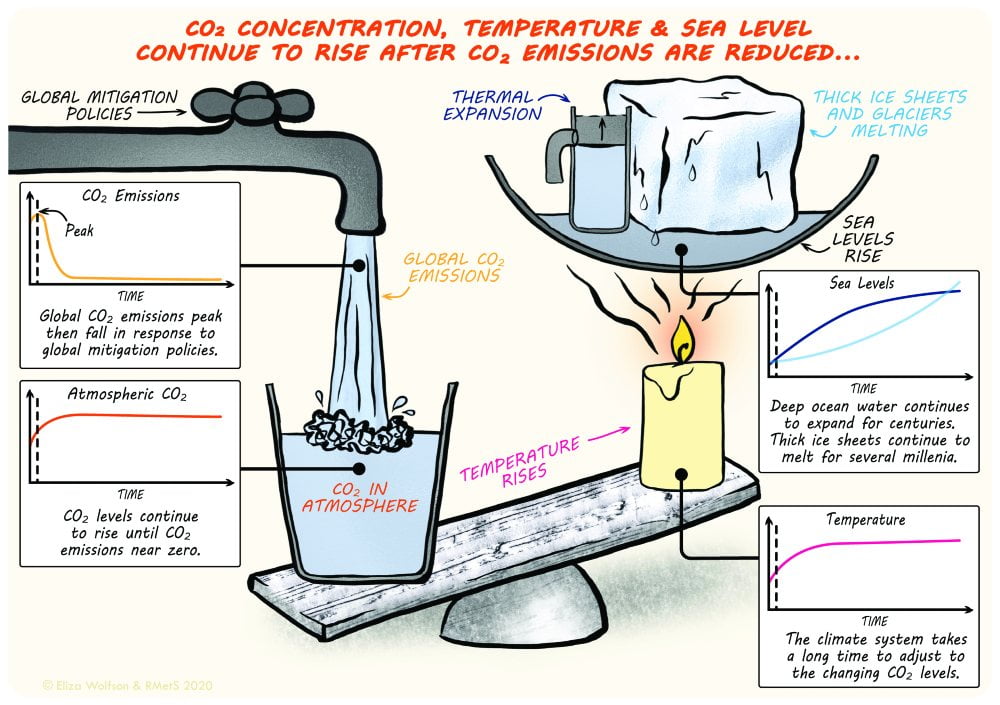 Humans have added additional sources and sinks, as are summarised by this diagram from the IPCC: 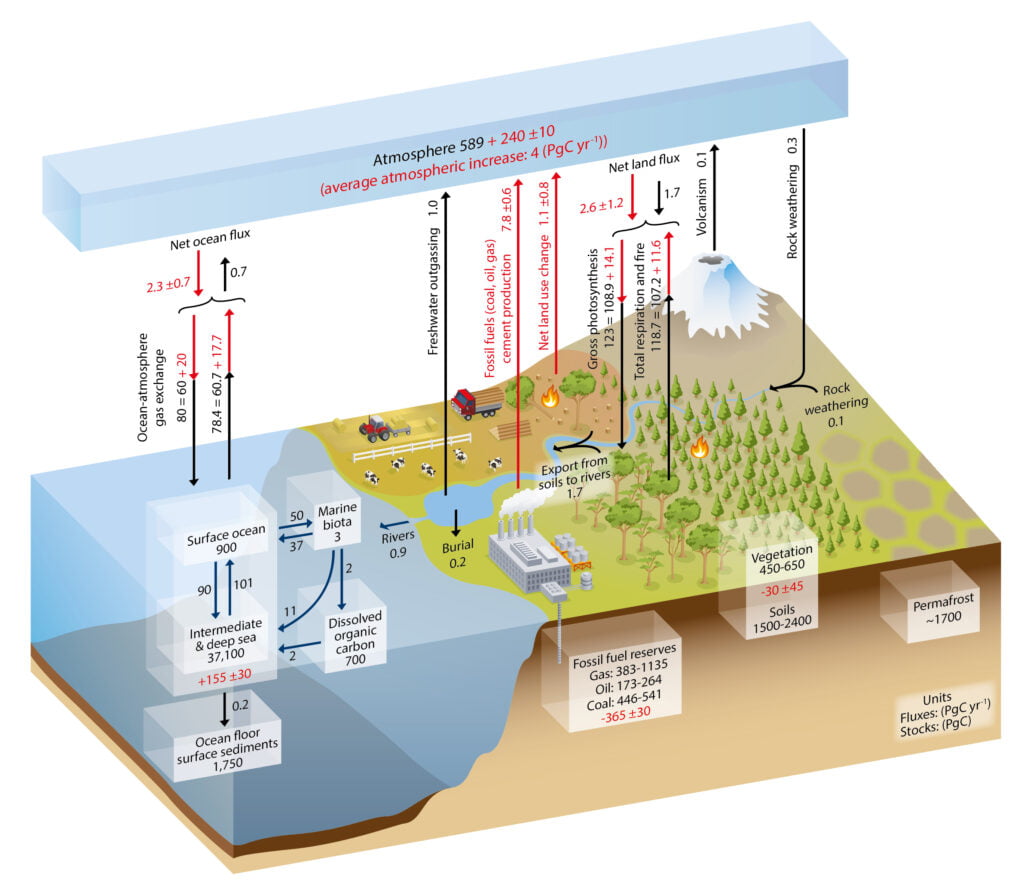 WG1 Chapter 6, figure 1. The numbers represent carbon reservoirs in Petagrams of Carbon (PgC; 1015gC) and the annual exchanges in PgC/year. The black numbers and arrows show the pre-Industrial reservoirs and fluxes. The red numbers and arrows show the additional fluxes caused by human activities averaged over 2000-2009, which include emissions due to the burning of fossil fuels, cement production and land use change (in total about 9 PgC/year). Some of this additional anthropogenic carbon is taken up by the land and the ocean (about 5 PgC/year) while the remainder is left in the atmosphere (4 PgC/year), explaining the rising atmospheric concentrations of CO2. The red numbers in the reservoirs show the cumulative changes in anthropogenic carbon from 1750-2011; a positive change indicates that the reservoir has gained carbon.

More processes could be added to this picture in the future, such as carbon capture and storage.

This animation was adapted from an infographic produced by the IPCC https://www.ipcc.ch/sr15/mulitimedia/worlds-apart/

How does climate relate to the weather?

We like to talk about the weather, to complain about its variability and to blame the weather forecasters for getting it wrong. But what is ‘climate’, and how does the weather we experience on a day-to-day basis relate to climate change, a subject which is increasingly dominating our newspapers and television screens? Why is it that we can’t make a perfect weather forecast? And how can we hope to predict the climate of the 21st century, when we can’t say what the weather will be doing in a week’s time?

Surprisingly, dice are a good way to think about the difference between weather and climate…

The animation below allows you to choose how many times to roll a dice and then see how often you get each of the six sides. Try a low number of rolls, then try some larger number of rolls and see what happens:

Throw the die a few hundred times. What is the average (mean) of the scores? The more throws, the closer the average gets to 3.5. If you were to throw the die one more time, you would not be able to predict the number that the die would land on, as the probability of throwing each number is the same. However, you could be very confident that the mean would still be 3.5.

But what has this got to do with weather and climate?

What if we associate weather types (for example, cloud cover) with each number on the die?

Try rolling the dice in the animation, again explore what happens as the number of rolls increases.

As when there were numbers on the sides of the die, you can’t predict what the weather will be on the next throw. Climate is defined as being the average of the weather over a long (typically 30 years) period of time. The ‘climate’ of this die is 50% cloud cover. A single throw of 0% or 100% cloud cover won’t affect the climate very much if you are taking the average of 100s of throws. In the same way we can have a very hot summer one year, and a very wet one the next, without the climate, the weather we expect to happen, necessarily changing.

So why do the weather forecasters never get it totally right? Mostly because the weather is a ‘chaotic’ system.

Very small changes to the starting conditions can lead to completely different weather patterns developing. This observation led Ed Lorenz to suggest that the flap of a butterfly’s wings in the Amazon rainforest could lead to a tornado in Texas. It is very unlikely, but it could.

This means that, to make a perfect weather forecast, we need to know what the atmosphere is doing currently, down to the scale of individual butterflies flapping their wings, which is obviously impossible!

So, since tiny changes in the starting conditions of a weather system can make significant differences to the outcome, when making a forecast we have to try to take into account what might be happening now, as well as what might happen in the future to affect the atmosphere. The best we can do is to produce a range of forecasts, with some indication of what is most likely, or least likely, to happen.

To help illustrate this, consider throwing two dice instead of one:

Move the slider to pick a number and throw the dice a large number of times. Notice the shape of the graph that is produced – the middle numbers are rolled more often than the smallest or largest numbers.

This sort of shape of ‘bell shaped’ graph is very common. For example, temperature measurements will often show a similar distribution, although temperature can of course take any value, not just the numbers one to twelve. 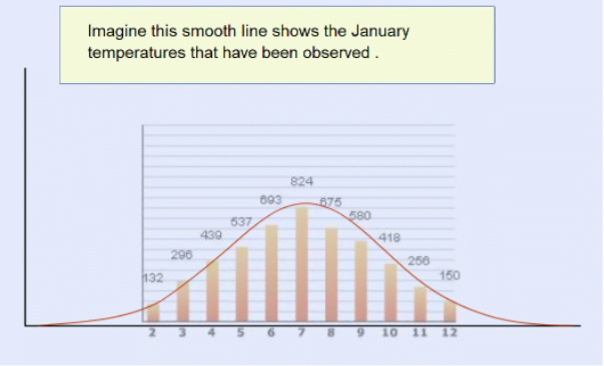 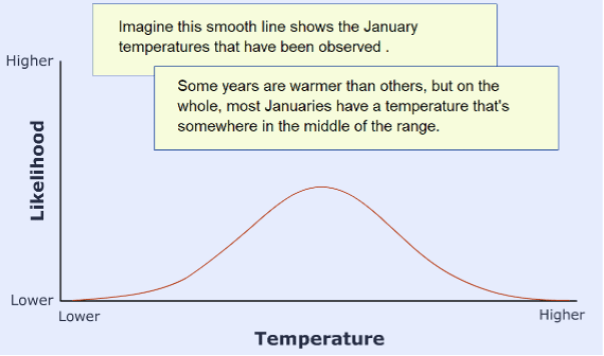 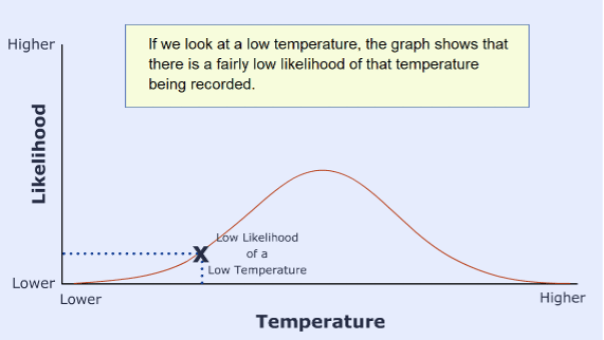 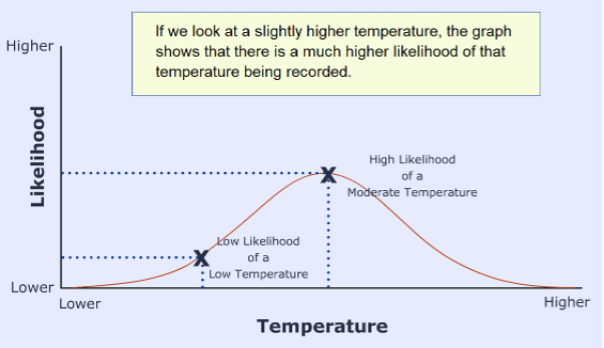 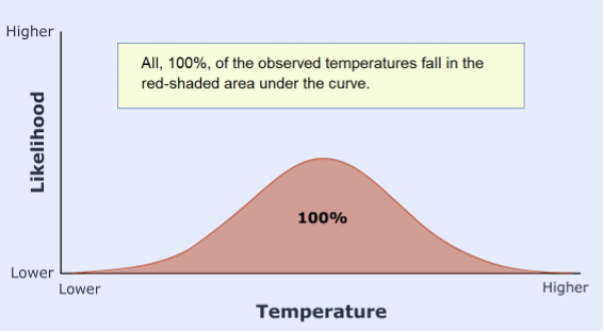 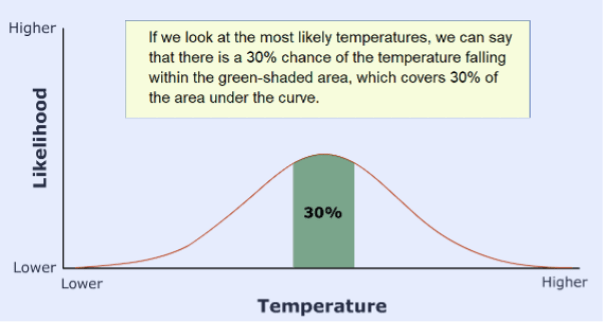 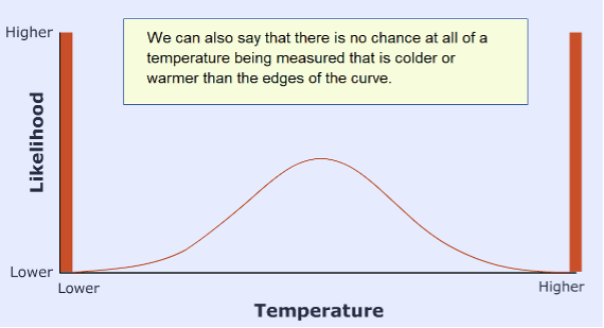 In this way, the results of many weather and climate forecasts can be combined to show what is most likely to happen, what is unlikely to happen and what almost definitely won’t happen.

But what about extreme events? How will the likelihood of an extreme event change as the climate warms? It is never possible to attribute one particular event to a particular cause. To go back to the dice example, you could load a die so that sixes occur twice as often as normal. But if you were to throw a six using this die, you could not blame it specifically on the fact that the dice had been loaded. Half of the sixes would have occurred anyway, even with a normal die. Loading the die just doubles the odds of throwing a 6.

In general, if the climate warms, the whole bell-shaped curve of temperature for a particular place shifts to warmer temperatures: 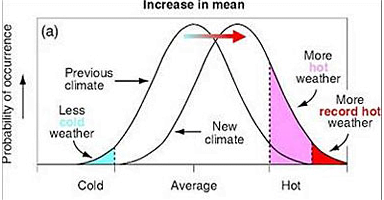 Taken from the Synthesis report on Climate Change, 2001, ipcc.ch

So, for example, we can say that the hot summer of 2003, which killed 22,000 – 35,000 people in central Europe, is twice as likely because of the global warming that has resulted from the man-made emissions of greenhouse gases. By 2050, we can expect summers as hot as that every other year.

Similarly, in the U.K., we can expect the number of extremely rainy days, with associated flooding, to increase. Already, the kind of rainfall that you could have expected once every 30 years in the 19th century is happening once every 12 years now. By the end of the century, it could be expected every 4 years.

The animations were originally developed by climateprediction.net and The University of Oxford Department for Continuing Education (Technology Assisted Life-long Learning Unit).

What affects the climate of the Earth? Why has the temperature of the Earth stayed approximately the same over very long periods of time, without varying by hundreds of degrees?

Click on the arrow to find out how it works.

But how does this relate to the climate?

Our tap pouring water into a bucket with a hole is a simple way of looking at the temperature of the Earth.

Since the Industrial Revolution, the increasing amount of greenhouse gas in the atmosphere has been restricting the amount of energy the Earth is losing to space – as if the hole in the bucket were partially blocked. As a result, the Earth is heating up. If we were to stop increasing the amount of greenhouse gas in the atmosphere, the Earth would eventually (in a few decades) reach a new, constant, warmer, temperature.

In the same way, if something suddenly adds a lot of heat to the atmosphere (imagine a massive wildfire, maybe) then that heats the atmosphere locally, making it lose more energy to space. As the atmosphere slowly cools down, the energy lost to space also reduces, until the atmosphere returns to the temperature it had before the fire.

Adding heat to the atmosphere does not change the climate. Changing the composition of the atmosphere (for example by adding greenhouse gases), does.

The animations were originally developed by climateprediction.net  and The University of Oxford Department for Continuing Education (Technology Assisted Life-long Learning Unit).