Acid rain
Rain that is more acidic than normal because water vapour has condensed on to particles of sulphate or nitrogen oxide.

Advection
The transfer of some property (e.g. temperature or moisture) by the horizontal movement of air or water, such as wind or ocean current.

Aerosol
A suspension of microscopic liquid and solid particles in the atmosphere for at least a few hours. Can be natural or anthropogenic (man-made).

Air
A naturally occurring mixture of gases, chiefly nitrogen and oxygen with small amounts of argon, carbon dioxide and water vapour- we sometimes call this our atmosphere

Airmass
A large area of air which has similar temperature and humidity characteristics.

Air pressure
The weight of the atmosphere pressing down on the Earth’s surface as a result of gravity.

Altitude
The height of the something above sea level. It is usually measured in feet or metres. Sea level is an altitude of 0 m.

Anemometer
An instrument for measuring the speed of wind

Anticyclone
A large are of high atmospheric pressure, characterised by outward-spiralling winds- a ‘high’. In the northern hemisphere winds rotate around an anticyclone in a clockwise direction.

Atmosphere
An envelope of gases surrounding the Earth. The main gases are nitrogen and oxygen, with smaller amounts of other gases such as water vapour, carbon dioxide and methane.

Beaufort scale
A scale that indicates wind speed by the effect wind has on familiar objects.

Biofuel
Any fuel (liquid, solid or gas) produced from organic matter (matter from animals or plants).

Cloud
A structure formed in the atmosphere by condensed water vapour.

Cold front
The boundary between two different air masses where the cold air pushes the warm air out of way and brings colder weather.

Condensation
The process by which water vapour becomes liquid water.

Conduction
The process of heat transfer through materials by molecular motion.

Convection
The process of heat transfer through fluids by means of rising currents.

Cyclone
A large area of low atmospheric pressure, characterised by inward-spiralling wind often called a ‘low’ or a ‘depression’. Also the name used for a hurricane in the Indian Ocean and Western Pacific.

Dew
Liquid water that has condensed on to objects at or near the Earth’s surface.

Dew point
The temperature below which water droplets can form in the air.

Downburst
A strong downdraught of short duration produced by some thunderstorms.

Evaporation
The process where liquid water turns into vapour (e.g. a rain puddle may evaporate into water vapour when the sun comes out). It is the opposite of condensation.

Eye
Centre of a hurricane

Fahrenheit
A scale of temperature introduced in about 1709 by the German Physicist, Fahrenheit, who was the first to use mercury as a thermometric substance. Primary fixed points were the temperatures of a mixture of common salt and ice and the temperature of the human body; with reference to these the freezing point of water was marked 32 degree and the boiling point of water was marked 212 degrees.

Fog
Water droplets in the air that reduce visibility to less than 1000m (1100 yards).

Frost
White ice crystals deposited on the surface of objects that have a temperature below the freezing point of water.

Greenhouse Gases
Gases which absorb some of the outgoing radiation from Earth and re-emit it back down towards Earth.

Hemisphere
One half of a sphere. The term is usually applied to regions north or south of the equator or east or west of the Prime (Greenwich) meridian.

High
Also known as an anticyclone- an area of high pressure with a system of winds rotating outwards. This usually means dry weather.

Humidity
The amount of water vapour in the air. May be absolute or relative.

Hurricane
A tropical revolving storm with sustained wind speeds of more than 118km/h (73mph). It is called a hurricane in the North Atlantic, but in other parts of the world it is known as a typhoon or tropical cyclone.

Isobar
A line on a map or chart that links points of equal atmospheric pressure.

Katabatic wind
A wind which blows down a slope.

Latitude
Position on the Earth’s surface north or south of the equator.

Lee
The side of a mountain, hillside or island what is facing away from the prevailing wind.

Lightning
Discharge of static electricity in the atmosphere, usually between the ground and a storm cloud.

Longitude
Position on the Earth’s surface east or west of the Greenwich (prime) meridian.

Low
Also called a depression- this region of low pressure can mean wet weather- it is the opposite of high pressure or anticyclone.

Meteorologist
Someone who makes a scientific study of weather, weather processes and/or the climate.

Meteorology
The science of the atmosphere- meteorology embraces both weather and climate and is concerned with all aspects of the Earth’s atmosphere (and those of the planets) and with the interaction between the atmosphere and the surface. The term was first used by Aristotle.

Millibar
Unit for measuring air pressure. Now a hectoPascal (hPa) is the standard unit for pressure.

Monsoon
The seasonal shift in wind direction that brings alternate very wet and very dry seasons to India and much of South-East Asia and other regions.

Occluded front
The combination of warm and cold fronts as a cold front overtakes a warm front. The front develops during the later stage of the life cycle of a frontal depression and is so called because of the associated occluding (shutting off) the warm air from the Earth’s surface.

Precipitation
Moisture that is released from the atmosphere as rain, drizzle, hail, sleet or snow.

Radiation
Process by which energy travels across space.

Sea-level
The normal level of high tide, used as a baseline for measuring height or depth.

Snowline
The vertical limit of snow lying on mountain side throughout the year.

Synoptic chart
A map showing large-scale weather patterns in an area at a given time.

Thunder
Sound caused by intense heating of the air by lightning.

Typhoon
A name of Chinese origin, meaning ‘great wind’ applied to the intense tropical cyclones which occur in the western Pacific Ocean. They are the same as the hurricanes of the Atlantic Ocean and the cyclones of the Bay of Bengal.

Water vapour
Water in its gas form. The proportion of water vapour in the air varies with time and place. The dominant greenhouse gas.

Weather
The state of the atmosphere (with regard to wind strength and direction, temperature, precipitation and pressure) at a specific time and place.

Use the following help sheet to write a fictional story about the passing of a depression. 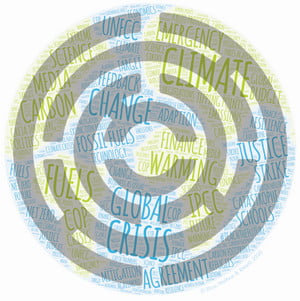 In this lesson we explore the language used to talk about climate change and look in detail at sea level rise, tipping points and 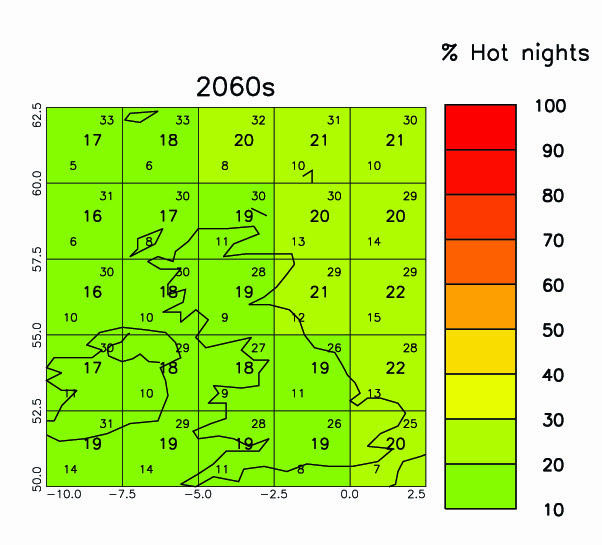 How will the Frequency of Hot Nights Change? 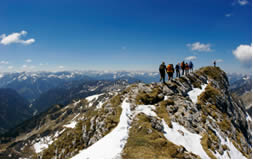