An air mass is a large body of air with relatively uniform characteristics (temperature and humidity). Air masses are classified according to their source region and track.

The source regions tend to be semi-permanent anticyclones (associated with the sinking regions of the global atmospheric circulation) in the sub-tropics and polar regions (‘tropical’ or ‘polar’ air). Air masses acquire their characteristics by contact with the underlying surface in the source region.

The UK sometimes also get Arctic air, which has travelled straight south from the Arctic. Returning polar air is polar air which changed direction over the Atlantic, hitting the UK from the west or even south of west, but still polar in nature. 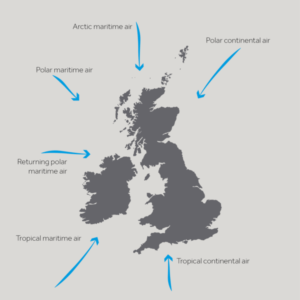 FIGURE 1: THE 6 AIR MASSES WHICH CAN AFFECT THE WEATHER IN THE UK

Air travelling over the sea is moistened and we refer to this as ‘maritime’ air, whereas the moisture in air with a continental track hardly changes and so this is known as ‘continental’ air.

Looking at Figure 1, it’s easy to think that the North East of the UK always experiences Polar Continental air, whilst the South West always experiences Tropical Maritime air etc, but this is not the case. Usually, the whole country experiences the same air mass at the same time. A front is where two air masses meet.

The table below which summarises what is happening to the air from the four major air masses as they approach the UK. 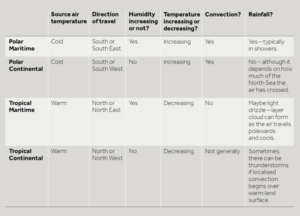 The satellite image in Figure 1, shows Tropical Continental air over much of continental Europe and the UK. Although there is a front coming in from the west, before it arrives much of the UK is cloud free and sunny. However, it’s worth noting those small, puffy blobs of cloud over the centre of Spain and France. In small areas, the sun has warmed the ground enough to make the air there rise and form localised summer thunderstorms. 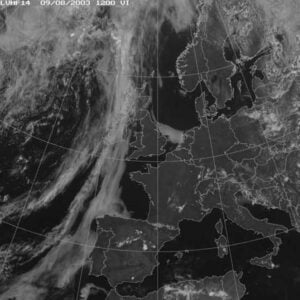 FIGURE 1: A SATELLITE IMAGE SHOWING TROPICAL CONTINENTAL AIR OVER MUCH OF THE UK AND CONTINENTAL EUROPE.© COPYRIGHT EUMETSAT/MET OFFICE

In Figure 2 you can see a typical satellite image showing Polar Continental air. Air blowing off Scandinavia is initially very cold and dry, giving a clear band of sky in the east North Sea and Baltic. However, as it travels over the water it picks up moisture and eventually cloud forms – over the western North Sea and the first bit of the UK it reaches – the east coast. 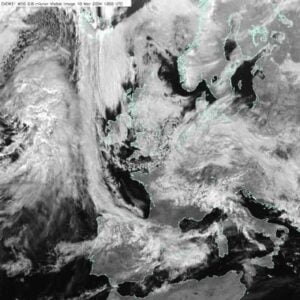 Figure 3, shows a very characteristic winter satellite image, as Polar Maritime air dominates UK weather. In the winter, the ocean is warmer than the land as well as being the moisture source – most of the convection (warm air rising) and rainfall occurs there. You can see the small blobs of convective cloud – puffy, cumulus clouds. The first bit of land the air reaches will be the west coast of Ireland, Wales, Scotland and England. As the air rises over the land, it cools further and more cloud, and rain, form. 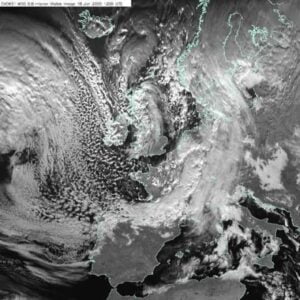 FIGURE 3: A SATELLITE IMAGE SHOWING POLAR MARITIME AIR OVER MUCH OF THE NORTH ATLANTIC AND EUROPE © COPYRIGHT EUMETSAT/MET OFFICE

In Tropical Maritime air (Figure 4), the air is cooling as it travels North, so the cumulus clouds associated with convection don’t form. However, the air is cooling without rising, so cloud can still form – this time in large horizontal sheets of stratus cloud. Again, the water source is the ocean, so the cloud mainly forms there. This cloud won’t produce rainfall as heavy as that associated with polar air, but might give a steady drizzle. 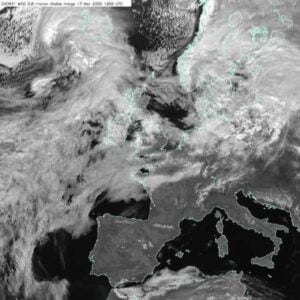 The animations in this YouTube film can also be found here

Air Mass resources from Weather and Climate: a Teachers’ Guide (with classroom resources and support information for teachers)

Take a look at the current surface air flow on earth.nullschool.net. Which air mass is affecting the UK now?

The followingYouTube clip from the BBC programme, The Great British Weather gives a great introduction to air masses. 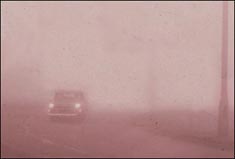 The Great Smog of 1952 A fog so thick and polluted it left thousands dead wreaked havoc on London in 1952. The smoke-like pollution

Synoptic weather charts The figure below shows the synoptic pressure chart at midnight on Wednesday, 17 May. 1. Name the pressure feature running from