The list below may look like something that would happen in the Arctic, but all of them happened in the UK during two particularly severe winters — in 1947 and 1963.

Serious snowfall in the winter of 1947

Serious snowfall in the winter of 1947

Thousands of people were cut off for days by snowdrifts up to seven metres deep during the winter of 1947, which saw exceptional snowfall. Supplies had to be flown in by helicopter to many villages, and the armed forces were called in to help clear roads and railways.

Between January and March that year, snow fell every day somewhere in the country for 55 days straight. Much of this settled because temperatures stayed very low, just above freezing most days.

No-one expected this winter to be severe, as January started with very mild temperatures at up to 14 °C recorded. This was soon to change, however. An area of high pressure moved over southern Scandinavia, setting up a weather pattern which dominated the UK for the rest of the month. The first snow came on 23 January, falling heavily over southern England. Blizzard conditions occurred across the south-west of England, leaving many villages in Devon isolated.

The cold, snowy weather continued through February and into March. Any breaks in the cold weather were short-lived.

February 1947 was the coldest February on record in many places. One notable feature of this month was the lack of precipitation in parts of western Scotland. Because of the persistent anti-cyclonic conditions, some places that were normally very wet had no rain at all. A completely dry month in western Scotland is unusual. It was unprecedented in February.

Another unusual feature of February 1947 was the lack of sunshine in the Midlands and south of England — a complete contrast to the north-west of Scotland, where the weather was unusually sunny.

When skies did clear, night-time temperatures plunged. Woburn in Bedfordshire registered a low of of -21 °C early on 25 February.

If February hadn’t been bad enough, March was even worse. In the first half of the month, there were strong gales and heavy snowstorms, making for blizzard conditions. On 4 and 5 March, heavy snow fell over most of England and Wales, with severe snow drifts forming. On 6 March, drifts were five metres deep in the Pennines and three metres deep in the Chilterns.

On 10 and 11 March Scotland had its heaviest snowfall of the winter, with snow drifts up to seven metres deep reported by 12 March. The snowstorm heading over Scotland was to be the last over the UK for this cold spell, however. As it moved away, temperatures were already rising in the very south west of the UK. Temperatures rapidly got up to about 10 °C, and the leftover snow began to thaw rapidly. This created a serious problem. The ground was still frozen solid due to the weeks of cold weather, leaving the melting snow with nowhere to go.

As the warmer weather moved across the UK, the melt-water poured into rivers and caused many to burst their banks. Flooding problems began to spread across England from the south west, as a new depression came in from the Atlantic, bringing rain and severe gales. During the afternoon of 16 March, winds over southern England averaged about 50 knots, with gusts of 80–90 knots. This caused damage to buildings and caused even more problems as the strong winds created waves which pounded and even broke some flood defences.

River levels continued to rise. The banks of the Trent burst at Nottingham on 18 March and hundreds of homes were flooded, many to first floor level. While floods in the south-west England began to subside, other rivers continued to rise in eastern England. The Wharfe, Derwent, Aire and Ouse all burst their banks and flooded a huge area of southern Yorkshire. The town of Selby was almost completely under water. Only the ancient abbey and a few streets around the market place escaped inundation. Seventy per cent of all houses in the town were flooded. The flooding issues continued into the spring, bringing a nasty end to the cold and snowy winter.

With temperatures so cold the sea froze in places, 1963 is one of the coldest winters on record. Bringing blizzards, snow drifts, blocks of ice, and temperatures lower than -20 °C, it was colder than the winter of 1947, and the coldest since 1740.

It began abruptly just before Christmas in 1962. The weeks before had been changeable and stormy, but then on 22 December a high pressure system moved to the north-east of the British Isles, dragging bitterly cold winds across the country. This situation was to last much of the winter.

A belt of rain over northern Scotland on 24 December turned to snow as it moved south, giving Glasgow its first white Christmas since 1938. The snow-belt reached southern England on Boxing Day and parked over the country, bringing a snowfall of up to 30 cm.

A blizzard followed on 29 and 30 December across Wales and south-west England, causing snowdrifts up to 6 m deep. Roads and railways were blocked, telephone lines brought down, and some villages were left cut off for several days. The snow was so deep farmers couldn’t get to their livestock, and many animals starved to death.

This snow set the scene for the next two months, as much of England remained covered every day until early March 1963. While snow fell, and settled there was still plenty of sunshine. The weak winter sun did not warm things up, however, as the lack of cloud cover allowed temperatures to plunge. In Braemar in Scotland, the temperature got down to -22.2 °C on 18 January. Mean maximum temperatures in January were below 0 °C in several places in southern England and Wales, more than 5 °C below average. Mean minimum temperatures were well below freezing. Temperatures weren’t much higher for most of February.

The long bitterly cold spell caused lakes and rivers to freeze, even sea water in some of England’s harbours turned to ice. Ice patches formed at sea and on beaches. Winter didn’t fully relax its grip until 4 March, when a mild south-westerly flow of air reached the British Isles. By 6 March, there was no frost anywhere in the British Isles and the temperature in London reached 17 °C — the highest since October 1962.

Finally, the coldest winter for more than 200 years in England and Wales had ended. With the thaw came flooding, but nothing like the scale of the 1947 floods. Soon after the winter had ended, life returned to normal. 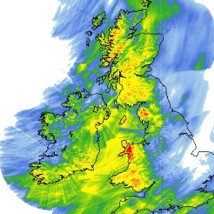 9. Water in the Atmosphere

In this lesson, we focus on cloud formation due to convection, orography (relief) and frontal uplift.

Isotherms The figure below is a map of isotherms, showing the average mean temperatures for January over the UK, based on average values for