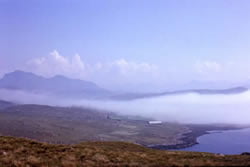 The picture shows a view south over Poolewe, north-west Scotland. It was taken at 14:00 UTC on 10 June 1963 and shows something unusual: coastal fog coexisting with cumulus clouds.

For several days, an anticyclone had been centred near Iceland, giving sunny days and light north-easterly winds over Scotland. At low levels, air had travelled to north-west Scotland from well to the north of the Shetland Islands. In this air’s source region, the temperature of the sea’s surface was about 10°C. As the air travelled southwards, it was moistened considerably.

Radiation cooling into the clear skies of the anticyclone favoured fog formation at night over the moister part of the land, but the sun dispersed the fog rapidly by day, except on the coast, where it persisted until early evening. An increase in fog depth occurred over Loch Maree (left-hand side of the picture). The flow of the cool air that maintained the fog was disturbed by a small island (Isle of Ewe), thus causing the water on the bottom right of the picture to be clear of fog.

Cumulus clouds began to form over Beinn Eighe (1009 m) and Beinn Alligin (985 m) around 10:00 UTC, when the sun had warmed the slopes sufficiently. Examination of the 12:00 UTC upper-air temperature and humidity profiles measured at Stornoway (a meteorological station roughly 100 km north-west of Poolewe), shows that a temperature of about 22°C was necessary on the slopes to start cumulus convection. Until this temperature was reached, air over the hillsides did not become warm enough to penetrate the anticyclone’s inversion. Over the sea, where there was virtually no heating of the low-level air, the inversion persisted. The temperature of the sea varies little between day and night, even on the sunniest of days. In contrast to land surfaces, water heats up very slowly. The reasons are that (a) water has a large thermal capacity (b) water moves around, whereas land does not (c) water evaporates (d) sunlight penetrates much farther into water than into the surface of land. 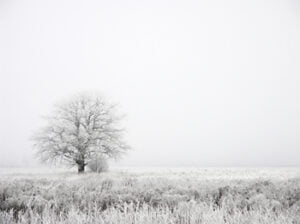 When fog occurs at temperatures below 0°C, its water droplets are supercooled, i.e. they exist in the liquid state at a temperature below the normal freezing point. When these droplets strike obstacles such as fences, masts or vegetation, they freeze almost instantaneously to form milky opaque deposits of ice crystals on the windward sides of the obstacles. These deposits are called rime. In the British Isles, supercooled fogs are uncommon at low levels. They occur much more frequently on the tops of hills and mountains.

Glaze is the name given to a coating of ice that forms on objects when supercooled water or drizzle droplets fall on them and freeze. The ice can become thick enough to bring down telegraph wires and power cables. Glaze on a road surface can be extremely dangerous, as the layer of ice (called ‘black ice’) is typically thin, hard and transparent. The road appears to be wet, rather than ice-covered.

Cool air tends to flow downhill. Accordingly, radiation fog is most likely to be encountered in dips, especially where there is a stream or river and therefore a source of moisture.

A motorist driving along a fog-free stretch of motorway is legally entitled to drive at 70 mph, except where otherwise indicated. If the motorist suddenly encounters fog, the immediate instinct is to brake. If another vehicle is following too closely, a collision may occur. Remember that the driver who is following does not react instantaneously to the brake lights of the vehicle in front. There is a reaction time, which is short if the driver is alert but may nevertheless be sufficient to make a collision inevitable. Once two vehicles have collided and come to a halt in fog, the likelihood of a multiple collision is great.

Some discussion points and questions

Even if drivers obeyed the Highway Code in respect of safe distances between vehicles, motorway pile-ups in radiation fog might still occur, given that reaction time has to be taken into account.
Given the patchy, unpredictable nature of radiation fog, signs that warn of fog may not be effective. Such signs cannot provide information on precisely where fog is present.
Mandatory speed limits on motorways where fog was known to be present would be ignored by drivers on fog-free stretches, for they would see no reason to obey them
Which are the most fog-free stretches of motorway in the UK, and why?
Can motorway pile-ups in radiation fog be prevented? If so, how? 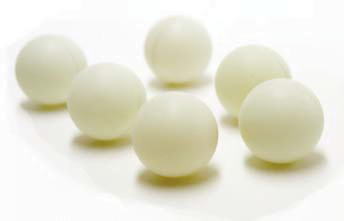 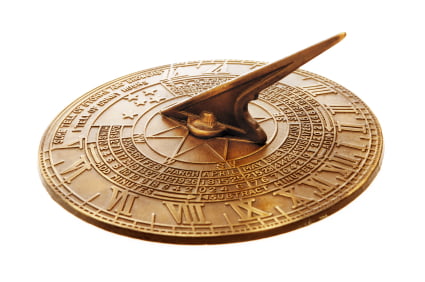 Make a sundial A sundial used to be used to tell the time. The sun makes a shadow on the dial…
Topics: Instruments 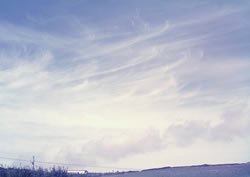 High wispy clouds Related Demonstrations and Experiments Cirrus Uncinus Have you ever noticed clouds like those in the upper part of the picture on
Topics: Observations and Data 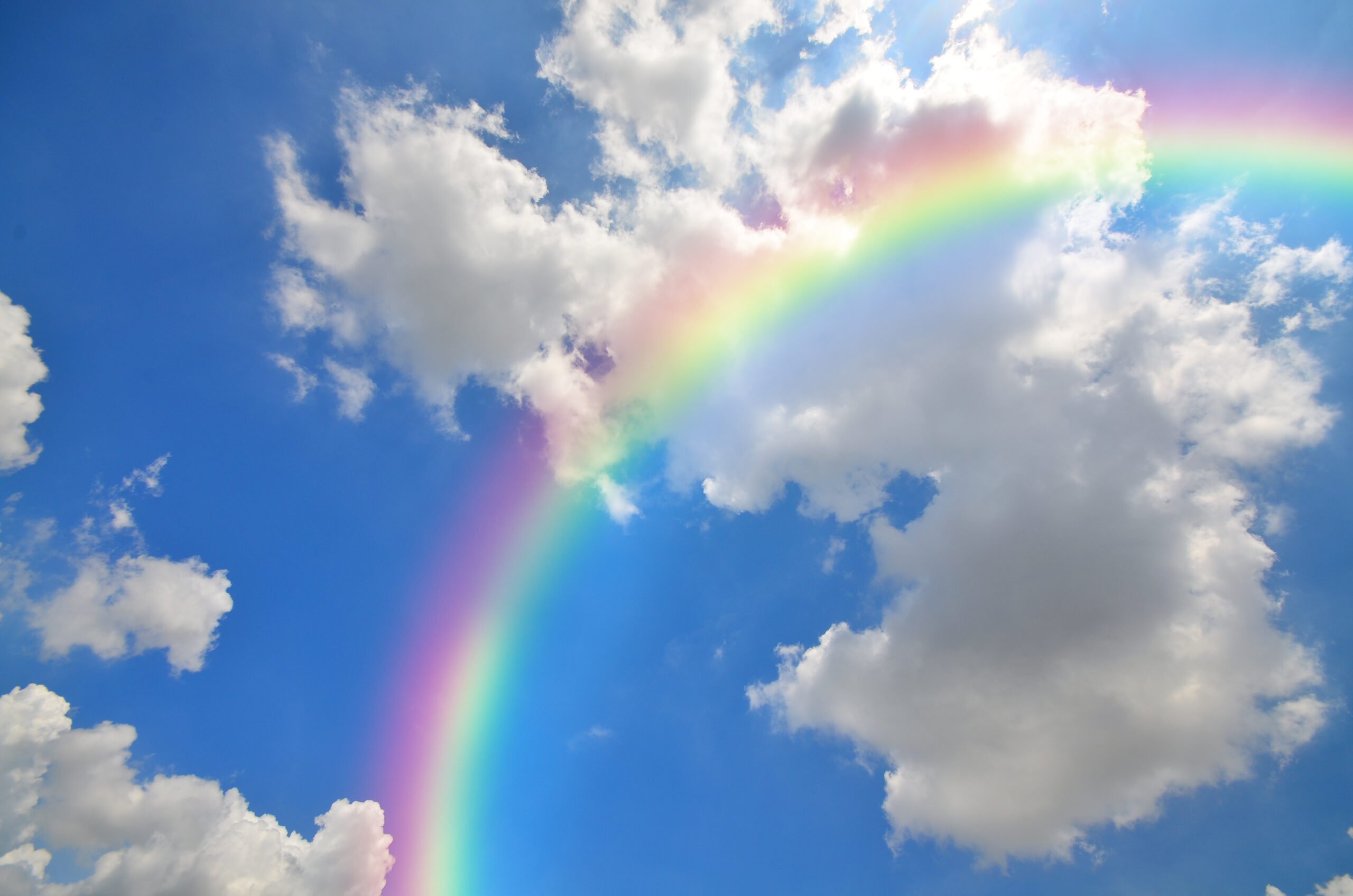 The rainbow is a familiar sight when the sun is shining and rain is falling. It can also be seen in the spray from
Topics: Observations and Data