Questions to consider:
Discuss the view that climate change mitigation always requires full international cooperation.
Should all countries have the same goals in their climate policy? 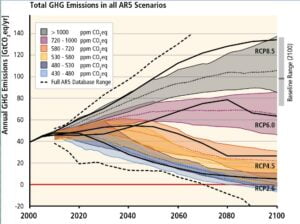 WG3 Chapter 6, Figure 7.
There are many different emissions pathways over the next 85 years which would achieve the same atmospheric greenhouse gas concentration in 2100. For example, to achieve 450 ppm CO2eq by 2100 (consistent with a likelychance of keeping temperature change below 2°C relative to pre‐industrial levels) a pathway within the pale blue shaded area would have to be followed. Achieving each pathway requires a mix of international and national legislation as well as technological advances.

Scenarios reaching atmospheric concentration levels of about 450 ppm CO2eq by 2100 (consistent with a likely chance of keeping temperature change below 2°C relative to pre‐industrial levels) include substantial cuts in anthropogenic GHG emissions by mid‐century through large‐scale changes in energy systems and potentially land use. Scenarios reaching these concentrations by 2100 are characterized by lower global GHG emissions in 2050 than in 2010, 40% to 70% lower globally, and emissions levels near zero GtCO2eq or below in 2100. In scenarios reaching 500 ppm CO2eq by 2100, 2050 emissions levels are 25% to 55% lower than in 2010 globally. In scenarios reaching 550 ppm CO2eq, emissions in 2050 are from 5% above 2010 levels to 45% below 2010 levels globally. At the global level, scenarios reaching 450 ppm CO2eq are also characterized by more rapid improvements of energy efficiency, a tripling to nearly a quadrupling of the share of zero‐ and low‐carbon energy supply from renewables, nuclear energy and fossil energy with carbon dioxide capture and storage (CCS), or bioenergy with CCS by the year 2050. These scenarios describe a wide range of changes in land use, reflecting different assumptions about the scale of bioenergy production, afforestation, and reduced deforestation. All of these emissions, energy, and land‐use changes vary across regions. Scenarios reaching higher concentrations include similar changes, but on a slower timescale. On the other hand, scenarios reaching lower concentrations require these changes on a faster timescale.

Climate policy – both mitigation and adaptation – can have an impact on other societal goals creating either beneficial (e.g. improving air quality) or adverse side‐effects. These intersections, if well‐managed, can strengthen the case for undertaking climate action. These societal goals, include those related to human health, food security, biodiversity, local environmental quality, energy access, livelihoods, and equitable sustainable development. Conversely, policies directed at other societal goals can influence the achievement of mitigation and adaptation objectives. These influences can be substantial, although sometimes difficult to quantify, especially in welfare terms. A multi‐objective perspective is important in part because it helps to identify areas where support for policies can advance multiple goals. 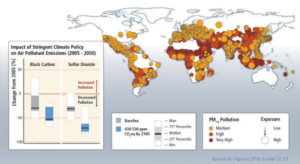 From IPCC video.
This map shows the exposure of populations to poor air quality, and, in the graph, the side effects of greenhouse gas emission policies on air pollutant emissions (the baseline, grey, scenario is based on legislation currently in place to reduce emissions, the blue scenario involves more stringent legislation). 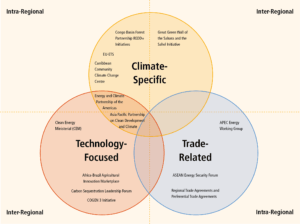 WG3 Chapter 14, Figure 16.
Some regional agreements with mitigation implications – many agreements were not primarily focussed on climate change mitigation, but have achieved emission reductions as an added benefit. 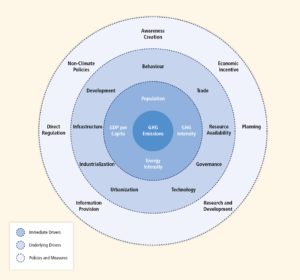 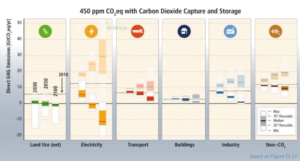 From IPCC video.In bold, you can see the projected emissions from each sector required to keep total emissions below 450ppm. The baseline scenario (no further mitigation) is shown faintly, where emissions would rise in all sectors except land use.

The most direct approach to reducing the effects of anthropogenic climate change is reducing greenhouse gas emissions. However, a number of controversial ‘geoengineering’ approaches have also been proposed as temporary, or additional, interventions. Geoengineering – also called climate engineering – is defined as a broad set of methods and technologies that aim to deliberately alter the climate system in order to alleviate the impacts of climate change.

An overview of some proposed geoengineering methods
Carbon Dioxide Removal methods:
(A) nutrients are added to the ocean (ocean fertilization), which increases oceanic productivity in the surface ocean and transports a fraction of the resulting biogenic carbon downward;
(B) solid minerals which are strong bases add alkalinity to the ocean, which causes more atmospheric CO2 to dissolve;
(C) the weathering rate of silicate rocks is increased, producing dissolved carbonate minerals which are transported to the ocean;
(D) atmospheric CO2 is captured chemically, and stored either underground or in the ocean;
(E) biomass is burned at an electric power plant with carbon capture, and the captured CO2 is stored either underground or in the ocean;
(F) CO2 is captured through afforestation and reforestation to be stored in land ecosystems.
Solar Radiation Management methods:
(G) reflectors are placed in space to reflect solar radiation;
(H) aerosols are injected in the stratosphere;
(I) marine clouds are seeded in order to be made more reflective;
(J) microbubbles are produced at the ocean surface to make it more reflective;
(K) more reflective crops are grown; and
(L) roofs and other built structures are whitened.
Theory, model simulations and observations suggest that some Solar Radiation Management (SRM) methods which reduce the amount of solar radiation reaching the Earth’s surface could substantially offset a global temperature rise and partially offset some other impacts of climate change. However, regionally, SRM would not precisely offset the temperature and rainfall changes caused by elevated greenhouse gases.
Numerous side effects, risks and shortcomings from SRM have been identified. For example:

Novel ways to remove CO2 from the atmosphere on a large scale are termed Carbon Dioxide Removal (CDR) methods. These methods have biogeochemical and technological limitations to their potential. Uncertainties make it difficult to quantify how much CO2 emissions could be offset by CDR on a human time scale. CDR would probably have to be deployed at large-scale for at least one century to be able to significantly reduce atmospheric CO2. A major uncertainty is the capacity to store carbon securely with sufficiently low levels of leakage. In addition, it is virtually certain that the removal of CO2 by CDR will be partially offset by outgassing of CO2 from the ocean and land ecosystems.
CDR methods can also have associated climatic and environmental side effects:

What is the best climate change mitigation policy?
WG3 FAQ 15.2

Policy design depends on policy practices, institutional capacity and other national circumstances. As a result, there is no single best policy instrument and no single portfolio of instruments that is best across many nations. The notion of ‘best’ depends on which assessment criteria we employ when comparing policy instruments and the relative weights attached to individual criteria. The literature provides more evidence about some types of policies, and how well they score against the various criteria, than others. For example, the distributional impacts of a tax are relatively well known compared to the distributional impacts of regulation. Further research and policy evaluation is required to improve the evidence base in this respect.

Different types of policy have been adopted in varying degrees in actual plans, strategies, and legislation. While economic theory provides a strong basis for assessing economy‐wide economic instruments, much mitigation action is being pursued at the sectoral level. Sectoral policy packages often reflect co‐benefits and wider political considerations. For example, fuel taxes are among a range of sectoral measures that can have a substantial effect on emissions even though they are often implemented for other objectives. Interactions between different policies need to be considered. The absence of policy coordination can affect environmental and economic outcomes. When policies address distinct market failures such as the externalities associated with greenhouse gas emissions or the undersupply of innovation, the use of multiple policy instruments has considerable potential to reduce costs. In contrast, when multiple instruments such a carbon tax and a performance standard are employed to address the same objective, policies can become redundant and undermine overall cost effectiveness. 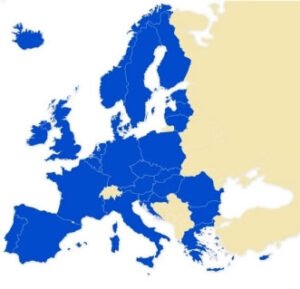 The EU Emissions Trading Scheme (ETS), is by far the largest trading scheme worldwide, covering over 12,000 installations belonging to over 4,000 companies and initially over 2 Gt (45%) of annual CO2 emissions. It puts a cap on the carbon dioxide (CO2) emitted by business and creates a market and price for carbon allowances, allowing some businesses to pay to emit more than their quota. The cost of buying emissions should drive investment in mitigating technology. It has involved binding and compulsory commitments from its member states together with Norway, Iceland and Liechtenstein. Emissions are estimated to have fallen by 2–5% relative to business‐as‐usual in the first pilot phase from 2005–2007.

In the current phase of the scheme (2013-2020), more industries are being included in the scheme including flights within Europe, and the cap on emissions is being reduced year by year. Compared to 2005, when the EU ETS was first implemented, the proposed cap for 2020 represents a 21% reduction of greenhouse gases. This target has been reached 6 years early. Future reform of the EU ETS will need to clarify the objectives of the scheme, i.e. a quantitative emissions target or a strong carbon price (e.g., to stimulate development of mitigation technologies). 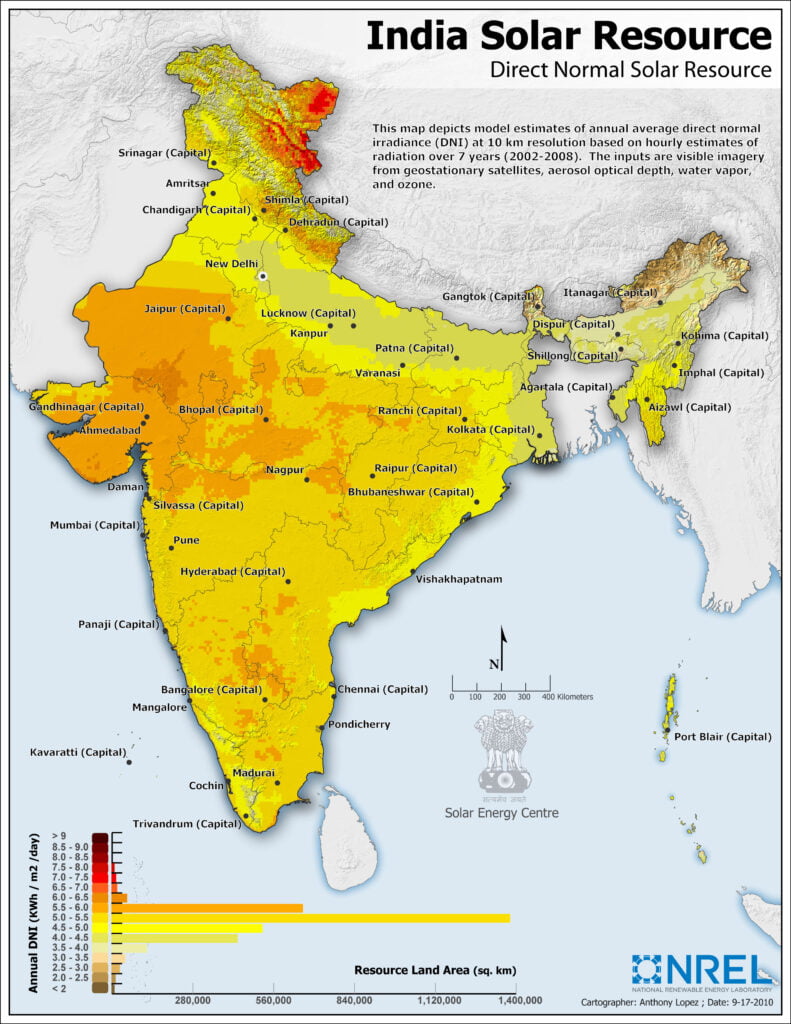 India’s National Action Plan on climate change (NAPCC) identifies eight critical missions to promote climate mitigation and adaptation. One of the core components of this policy, the National Solar Mission, has the specific goal of increasing the usage of solar thermal technologies in urban areas, industry, and commercial establishments. India is a country that has tremendous solar energy potential, receiving nearly 3000 hours of sunshine every year, which is equivalent to 5000 trillion kWh of energy. India can generate over 1,900 billion units of solar power annually, which should be enough to service the entire annual power demand even in 2030.  This, coupled with the availability of barren land in the sunniest regions, increases the feasibility of solar energy systems in these regions.

The gap between India’s supply and demand of energy is widening, so developing solar energy helps meet India’s energy needs and also addresses climate mitigation issues. Currently renewable energy supplies only 7.7% of power, mostly through wind. The government has rolled out various policies and subsidy schemes to encourage the growth of the solar industry which also creates a solar manufacturing industry. In January 2015, the Indian government significantly expanded its solar plans, targeting US$100 billion of investment and 100 GW of solar capacity by 2022. It is expected that around 2 GW of solar capacity will be added in 2015. Current limits to growth include the high price of imported silicon. 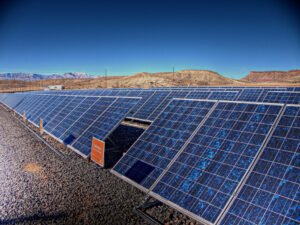 How fast does a cold front move? An investigation using weather station data 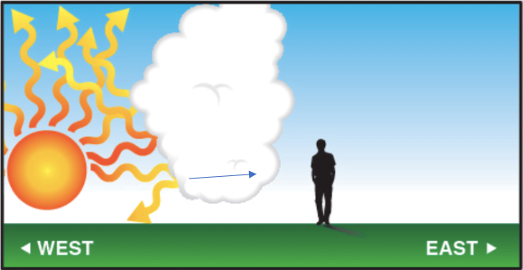 “Red sky at night, shepherd’s delight. Red sky in the morning, shepherd’s warning” (or sailors rather than shepherds, depending on where in the country 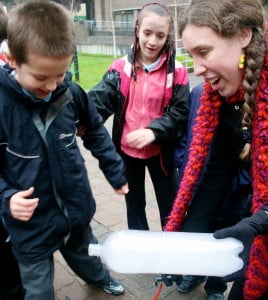 Top 10 Ideas for Teaching the Weather