Think about a person standing at the Equator. In the course of a day, the planet rotates once, meaning that you travel a colossal 2π x R (the radius of the Earth – 6370km) = 40,000km through space – a speed of about 1700km/ hr. You don’t notice that you are travelling so fast, because the air around you is travelling at the same speed, so there is no wind. On the other hand, if you are standing at a Pole, all you do in the course of a day is turn around on the spot, you have no speed through space and similarly the air around you is stationary.

Now, think about really fast moving, Tropical air which is being pulled towards the poles by a pressure gradient. As it travels polewards, it moves over ground which is rotating more slowly, and so it overtakes the ground, and looks like it is moving from west to east. Similarly, slow moving polar air will be left behind by the rotating Earth and look like it is moving from east to west if it is pulled equatorward by a pressure difference.

In general, moving air in the Northern hemisphere is deflected to the right by the Coriolis Effect. 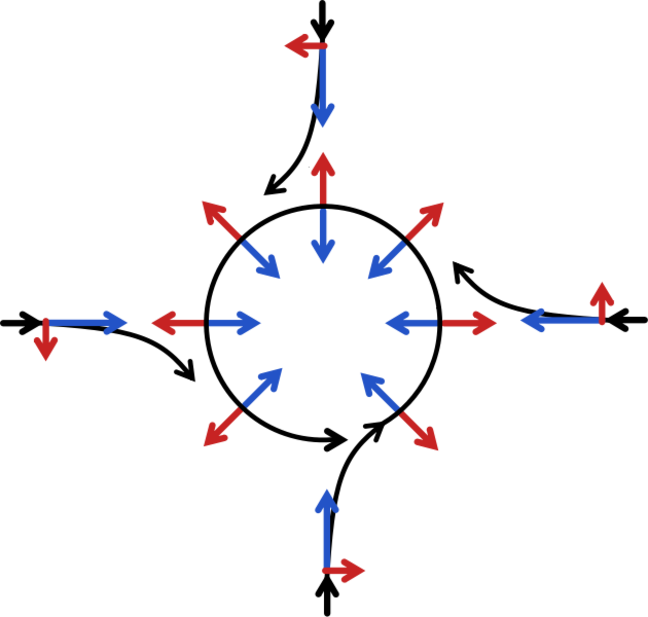 In this diagram, the black arrows show the direction the air is moving in. The Coriolis force pulls the air to the right (red arrows). As the air is being pulled in to the depression by the pressure gradient (blue arrows), it is continuously deflected by the Coriolis Force. When the air moves in a circle around the depression, the Coriolis force (red arrows) is balanced by the pressure gradient force (blue arrows).

Sign up for infrequent updates about events and resources for teachers